On Tuesday May 6th, Jenna Curtis, Tyler Hallman, Evan Jackson, and W. Douglas Robinson set out to break the Benton county big day record. At 141 species, breaking the Benton county record set in 2007 would be no easy feat! 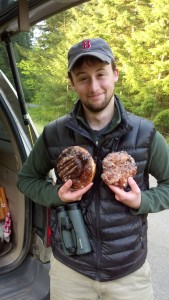 Somehow this is the only picture we took of our big day! Big donuts for big energy
After a morning on the marsh hoping for a rare rail, the big day began in earnest on a cold and windy Mary’s Peak. Next, we set off in search of shorebirds and songbirds at the Philomath Sewage Treatment Ponds and the Finley National Wildlife Refuge. By the time we reached 110 species we were on our way to Willamette Park, the OSU campus, Alsea, and finally Alder Spring Tract. As the sun neared setting we tried and failed to pick up the last few species we needed at EE Wilson. Fatigue eventually won over, we ended our day at 135 species; two fewer than the year before and six fewer than the county’s record. When all was said and done, we may have failed to break the record, but we had a great time doing it!

Tyler’s Story: The day started out slowly, but we trudged along hoping for our luck to change. Somehow we had some conspicuous misses including Hairy Woodpeckers, Yellow-breasted Chats, and Belted Kingfishers. Despite those misses, we turned up some good birds. My bird of the day was a group of seven Lesser Yellowlegs that landed in a puddle on Finley Refuge Road in the Eastern Portion of the Conservation Wetlands. At that distance their delicate thin stature and short straight bills were unmistakable. Considering the amount of time I’ve put in staring at distance Greater Yellowlegs hoping for lessers, and the fact that I had only seen two others so far this year that was a great find.

Doug’s Story: The Benton record is apparently 141 species, set in 2007. At the time, four of us knew it was a record, but we thought it would be fairly easy to beat. Well, the record has stood since then. Many efforts to break it have resulted in tired legs, dashed dreams and broken hearts. Nevertheless, we keep trying every year, hoping for the perfect weather that allows us to get all the songbirds in the morning and a few arriving shorebirds at mid-day, as well as finding at least one lingering individual of all the ducks. This year we were on track to break the record, having found 100 species by 10 am, but then we struggled to run across species that were easily found the very next day: Red-shouldered Hawk, Hairy Woodpecker, and Belted Kingfisher, among others. My favorite bird was a Golden-crowned Sparrow singing on Marys Peak at dawn that had us really perplexed for a while as it was singing an atypical, yet very pleasant, song.

Evan’s Story: Despite the day starting slowly, my favorite bit of the day was just at dawn while we were up on Marys Peak. It was cloudy at the higher elevations, with light mist coming out of the fog, and this ethereal mood made the singing Hermit and Varied Thrushes seem to echo around us. Hearing these birds in the high spruce forest reminded me of lots of days spent in the mountains early in the morning. It was also great to find some Sooty Grouse and Mountain Quail, as well as picking up other species like Northern Pygmy-Owl. As the day proceeded, we found lots of really interesting shorebirds like Lesser Yellowlegs, and a close ‘pumping’ American Bittern. One bird that really captured the rapid-paced spirit of the day was a Gray Jay that we spent a little while listening for, and promptly took off after it called. However, we got to watch Rufous Hummingbirds perform courtship flights as we waited, which is always a treat. Even though we didn’t break the county record, it was a great day of birding with great company.

Jenna’s Story: I always love Big Days because they present a great opportunity to find rare, exciting county birds. Birds you don’t find every day, possibly because you just weren’t expecting them, or possibly because they were in one part of the county while you were in another. Limiting the team to a single county may reduce the total number of birds you’ll see overall, but it makes it even more of a fun challenge! My favorite bird of the day was probably the happy little mother Hutton’s Vireo, sitting quietly in her nest during a hot afternoon. We had observed her and her mate building the nest earlier; it was great to see her on the comfy, mossy finished nest!